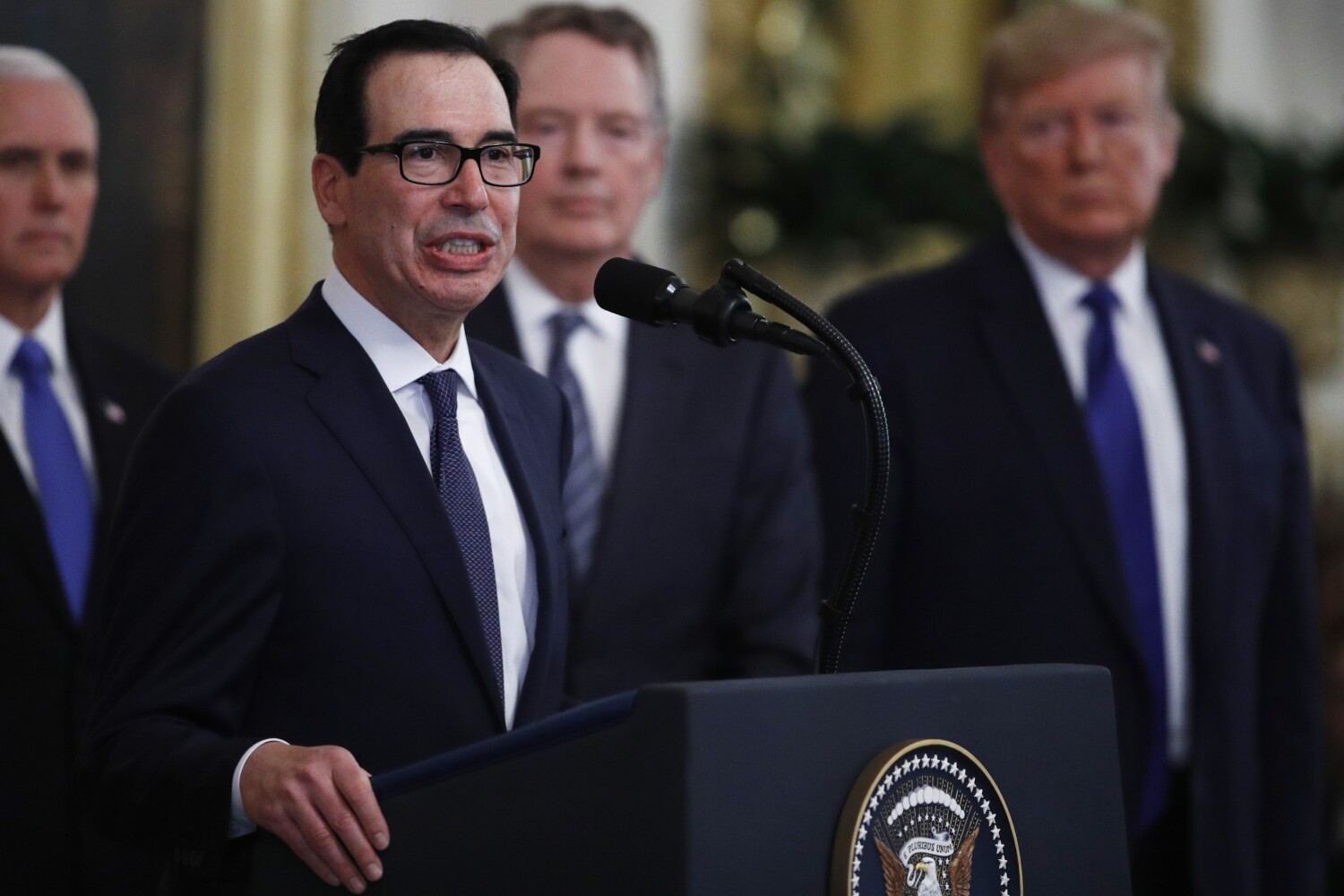 After haggling for days over the final details, Senate Democrats and the White House agreed Wednesday to a nearly $2-trillion stimulus package to combat the economic fallout of the coronavirus outbreak, including direct payments to most Americans and a half-trillion-dollar fund to shore up struggling companies.

The stimulus bill — by far the largest ever proposed — comes with a price tag equivalent to 9% of the nation’s gross domestic product and is meant to provide direct financial aid to help individuals, hospitals and businesses. It includes $300 billion for small businesses, $150 billion for local and state governments and $130 billion for hospitals, according to those involved in the negotiations.

A Senate vote on the deal could occur by midday Wednesday, with the House potentially following soon after.

“At last we have a deal,” Senate Majority Leader Mitch McConnell (R-Ky.) said shortly after 1 a.m. in Washington. “It will rush new resources onto the front lines of our nation’s healthcare fight. And it will inject trillions of dollars in cash into the economy as fast as possible to help American workers, families, small businesses and industries make it through this disruption and emerge on the other side ready to soar.”

House members have not returned from their scheduled recess, and remote voting is not allowed under House rules. Pelosi indicated Tuesday that the fastest way for the House to approve the Senate bill would be by unanimous consent, a tactic generally reserved for small, noncontroversial legislation. It requires the consent of all current 430 House members, meaning a single representative could object, as long as he or she is on the floor to do so.

If that happens, Pelosi said she would probably need to call back the entire chamber for an in-person vote, a more time-consuming process that would also raise health risks and logistical challenges for members. It could also lead to potential changes to the legislation that would have to be reconciled with the Senate.

Despite unusually bitter partisan bickering Monday on the Senate floor, Pelosi said earlier in the day that the final bill would represent a solid compromise between Senate Republicans — who crafted the initial draft with Democrat input — and Democrats, who delayed passage to ensure it included more of their priorities. “We think the bill has moved sufficiently to the side of workers,” she said.

The measure is the third stimulus bill proposed by Congress to address the economic and social disruptions of the pandemic. It follows an initial $8.3-billion measure largely aimed at developing a vaccine and a second package, passed last week, that mandated greater access to paid sick leave for workers as well as free COVID-19 testing.

The latest $2-trillion stimulus bill is expected to include direct payments of $1,200 or less to most adults, loans to businesses and an expansion of unemployment insurance and other aspects of the social safety net. It comes at a time when millions of Americans have been asked to stay away from school and work, and remain inside their homes to reduce the spread of the disease.

The amounts of the one-time payments, which officials hope could go out to Americans as soon as early April, will be based on income reported in 2018 taxes, declining gradually beginning with individuals who made $75,000 or married couples filed jointly who made $150,000. Individuals making $99,000 or above or married couples making $198,000 or more would receive no check. People would also receive an additional $500 per child.

Schumer said negotiators agreed to put “unemployment insurance on steroids” by expanding those covered to include people who are furloughed, gig workers and freelancers, and by increasing the payments by $600 dollars per week for four months on top of what states provide as a base unemployment compensation.

“It will put money into the hands of those who need it so much, because they have lost their jobs through no fault of their own,” Schumer said.

Other changes to the final bill included increased oversight of the $500-billion fund managed by the Treasury to shore up struggling businesses through loans and loan guarantees. Recipients are expected to include airlines and other hard-hit travel sectors.

In a major sticking point for Democrats, the initial proposal gave Treasury latitude to disburse the funds, including the discretion not to disclose for up to six months which companies got taxpayer dollars.

The final deal includes an inspector general to oversee the $500-billion fund, as well as a five-person congressional panel.

“We cannot have a situation where, when a company is getting money from the Treasury, the Federal Reserve, that we don’t know about it,” Schumer said.

Others involved in negotiations said the deal also includes around $130 billion for hospitals dealing with a shortage in medical masks, ventilators and hospital beds ahead of an expected wave of cases — a $25-billion increase from what was initially proposed. And it provides $150 billion directly to state and local governments dealing with the outbreak.

Stocks rose sharply in America and around the world Tuesday in anticipation of the infusion of aid into the U.S. economy.

“If we get this package, we’ll be setting the stage for a good rebound in the second half of the year,” said Larry Kudlow, the White House’s top economic advisor. “That’s our thinking. This package will undergird workers and families, Main Street, small businesses.”

SIGNUP FOR OUR NEWSLETTER

You may have missed