Coronavirus Outbreak LATEST Updates: According to the SOPs issued by the MHA, states will have to share the requirement for Shramik trains with the Ministry of Railways and make suitable arrangements for sending and receiving the migrants at railway stations. Moreover, the routes of trains will be decided by the railways in consultation with MHA.

As many as 57 more COVID-19 cases were reported in Andhra Pradesh in the past 24 hours, taking the state’s total number of infections to 2,339. According to the health department in the state, of the total positive cases, there are 691 active cases.

So far, 52 COVID-19 patients have succumbed to the infectious disease.

In a letter to World Health Organization Director-General Tedros Adhanom Ghebreyesus, US president Donald Trump warns of freezing funds to the agency if it “does not commit to major substantive improvements within the next 30 days”.

The letter says that if the WHO “does not commit to major substantive improvements within the next 30 days, I will make my temporary freeze of United States funding to the World Health Organization permanent and reconsider our membership of the organization.”

After registering a single-day jump of 4970 cases, the total number of COVID-19 cases in India surged past 1 lakh on Tuesday, according to the latest data released by Ministry of Health and Family Welfare. The total number of infections across the nation stood at 1,01,139.

Four migrant workers were killed and 15 injured after the bus they were travelling collided with a truck, in Yavatmal district in Maharashtra on Tuesday morning, ANI reported. The bus departed from Solapur to arrive at Jharkhand.

Three migrant labourers were killed and 12 others were injured after a truck carrying them in Jhansi-Mirzapur highway, overturned in Mahoba district of Uttar Pradesh late on Monday.

SP Mahoba Mani Lal Patidar, said about 17 persons were travelling in the vehicle that was coming from Delhi. Tire burst is said to the cause of the accident.

The accident took place in village Mahua near Panwari, according to The Hindu.

India on Monday recorded its biggest single-day jump in cases with 5,242 cases and 157 deaths, taking the total infections to 96,169 and total fatalities to 3,029.

As the country entered the fourth phase of the nationwide lockdown, many state governments, including Karnataka, Gujarat and Assam too extended the lockdown in their states and issued guidelines allowing for more relaxations than in the previous phases of the lockdown in a bid to kickstart the economy.

This comes after the Centre on Sunday extended the nationwide lockdown till 31 May and gave states greater freedom to demarcate red, orange and green zones and also to impose additional restrictions if required.

India has been under a lockdown since 25 March, which was first supposed to be for 21 days or till 14 April, but was later extended till 3 May, then further till 17 May  and now for another two weeks till 31 May.

The Karnataka government on Monday said it won’t allow passengers from states like Gujarat, Maharashtra, Kerala and Tamil Nadu to enter into the state till 31 May except in special cases and will consider allowing their entry in a staggered manner.

In the guidelines issued on Sunday, the Ministry of Home Affairs had allowed the movement of passengers buses and vehicles between states with the rider that both state governments would have to give their consent.

The state government also decided to do away with the green, orange and red zones system in favour of dividing the state into containment and non containment zones and allowed the resumption of public transport in non-containment zones even as Karnataka reported its highest single-day spike in cases, taking the total number on infections in the state to 1,246. The state government also decided to follow a total lockdown on Sundays.

The Gujarat government also decided to demarcate only containment and non-containment zones in the state and granted a host of relaxations in the non-containment areas, including opening of shops and offices between 8 am and 4 pm. However, such business and commercial establishments need to follow odd-even formula, wherein only 50 percent establishments can remain open on any given day, said chief minister Vijay Rupani.

The state government also allowed reopening of barber shops and salons in non-containment zones besides shops selling paan masala. Restaurants and eateries can remain open for takeaway orders only, Rupani said. He also announced resumption of bus and autorickshaw service across the state, barring a few places

Telangana chief minister K Chandrashekar Rao announced extension of COVID-19 lockdown till 31 May and said that barring containment zones, rest of the areas in the state would be green zones in which public transport will be allowed with certain conditions.

Delhi chief minister Arvind Kejriwal announced opening of shops in markets on an odd-even basis and running of buses with 20 passengers but said Metro services, schools, colleges, cinema halls and saloons will remain closed till 31 May.

As the National Capital recorded  299 new cases, pushing the total past 10,000, the chief minister reiterated that we will have to learn to live with virus and said that all shops will be allowed to open in Delhi, along with restaurants which can only open for home delivery and take-aways. No relaxations will be allowed in containment zones and only essential services will function there, he said.

In Maharashtra, which reported 2,033 new cases and 51 deaths on Monday, chief minister Uddhav Thackeray said that around 50,000 business have been allowed to open in green and orange zones.He said that since schools and colleges would resume from June, the virus had to be controlled before the end of the monsoon. No official guidelines have been issued by the state government till now.

Odisha, too, extended lockdown till the end of May, with relaxations allowed as per the guidelines issued by the MHA. While, Assam government asked District Magistrates to issue orders for night curfew till the end of the lockdown, Chhattisgarh extended restrictions under CrPC Section 144 for three months and ordered that stadiums and sports complexes must remain shut.

The Punjab government said that no movement of people will be allowed between 7 pm and 7 am and allowed the reopening of shops while stipulating that shopping complexes would remain shut. It also allowed barber shops and saloons to open subject to compliance with guidelines issued by the health department.

According to PTI, the health ministry also said that for a population of one lakh , there are 7.1 coronavirus cases in India so far as against 60 globally.

Of the 157 deaths deaths reported since Sunday morning, 63 were in Maharashtra, 34 in Gujarat, 31 in Delhi, six in West Bengal, five each in Rajasthan and Madhya Pradesh, four in Tamil Nadu, three in Punjab and one each from Andhra Pradesh, Bihar, Haryana, Jammu and Kashmir, Karnataka and Odisha.

According to the ministry’s website, more than 70 percent of the deaths are due to comorbidities, the existence of multiple disorders in the same person.

However, a PTI tally of figures announced by different states and UTs as of 9.40 pm put the number of those having tested positive for the infection at 1,00,096, with a death toll of 3,078 and recoveries at 38,596 across the country.

Gujarat, during the day, recorded 366 new COVID-19 cases and 35 deaths, including 31 from the worst-hit Ahmedabad, taking the state’s case count to 11,746 and the number of fatalities to 694, a health department official said.

Kerala also saw 29 new cases — all but one being returnees from overseas and other states — raising concerns about the state witnessing a possible third wave of the dreaded virus infection. The state was first to report the virus infection, but at least twice it has already been seen as having flattened the curve of the infection.

Revising its strategy for COVID-19 testing, the Indian Council of Medical Research said on Monday that returnees and migrants who show symptoms for influenza-like illness will be tested for coronavirus infection within seven days of ailment and stressed that no emergency clinical procedure, including deliveries, should be delayed for lack of testing.

In its revised strategy, the medical research body also added that all hospitalised patients who develop symptoms for influenza-like illness (ILI) and frontline workers involved in containment and mitigation of COVID-19 having such signs will also be tested for coronavirus infection through the RT-PCR test.

India joined nearly 120 countries at a crucial conference of the World Health Organisation in pushing for an impartial and comprehensive evaluation of the global response into the coronavirus crisis as well as to examine the origin of the deadly infection.

Since the first case of the deadly coronavirus was reported in China last December, more than 47 lakh people have tested for this virus across the world and over 3 lakh have lost their lives. India is the 11th most affected country, while the US tops the chart with over 14.9 lakh confirmed cases so far.

China’s official tally of confirmed infections is less than 84,000, while it has reported more than 4,600 deaths.

With inputs from agencies 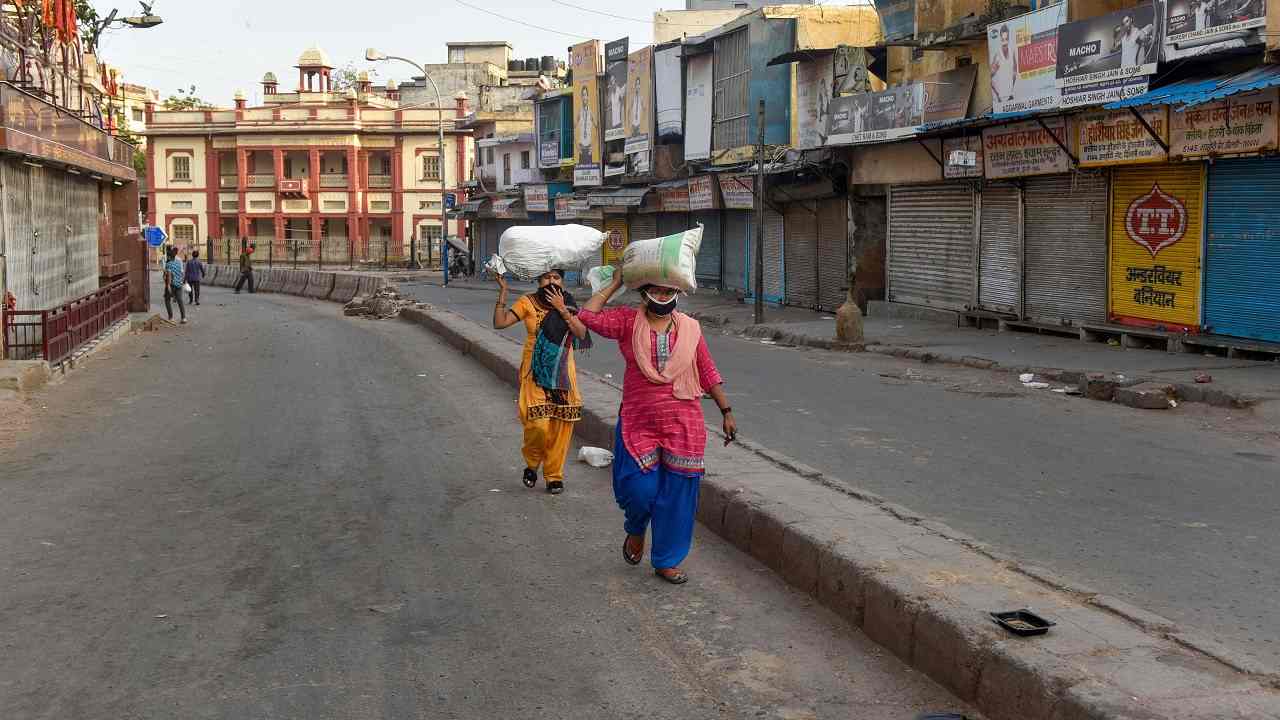 UP: At Least 6 Dead As Violence Rocks During Anti-CAA Protests