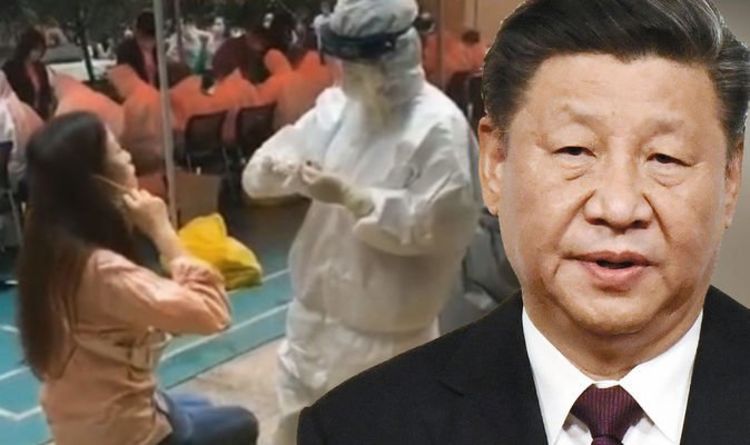 China has faced brutal criticism from world leaders regarding the accuracy of its coronavirus cases data and cooperation with the World Health Organisation (WHO). New data has been revealed to show that coronavirus cases in Wuhan may have been higher than initially anticipated. This has sparked rumours the secretive communist state is misleading the world on the severity of the disease in the country.

A study measuring antibodies within the body was conducted on a random selection of 11,000 Wuhan residents in April.

It was concluded that 5 to 6 percent of people could have been infected with the disease.

With a population of 11 million in Wuhan the findings suggest that upwards of 500,000 people in the city could have already been infected with COVID-19.

The data of the study was reported by Beijing-based news outlet Caixin on May 12 and explained scientists believed the amount was higher than expected.

The report was published after Wuhan officials announced a 10-day plan to test all 11 million residents of the city that has resulted in long queues.

The initial antibody test, according to the state media outlet, said 11,000 residents from more than 100 gated communities across Wuhan’s 13 districts were tested.

Fears have arisen the Caixin report will be taken down or censored by the Government as website Sina, the operator of the country’s social media platform Weibo, has deleted the report.

Other reproductions of the same report have since been removed from Chinese news websites.

This comes after Chinese President Xi Jinping announced China had turned the tide on the virus.

President Xi spoke at the opening of the 73rd World Health Assembly on Monday and addressed the coronavirus crisis.

He said: “In China, after making painstaking efforts and enormous sacrifice, we have turned the tide on the virus and protected the life and health of our people.

“All along, we have acted with openness, transparency and responsibility.”